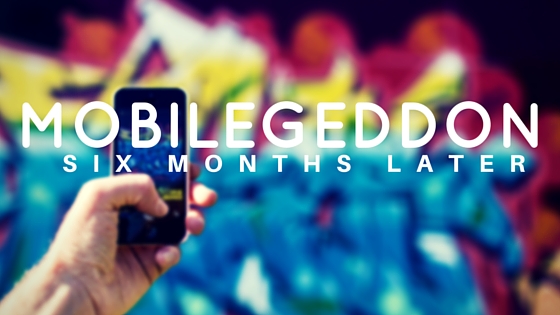 October 15: 2015: Wednesday, October 21st will mark the six month  anniversary of Mobilegeddon, the deadline date that Google laid down earlier this year for sites to become compliant with its standards for mobile usability.

In the past 180 days, webmasters across the nation have been consulting with Google Search Console (AKA Webmaster Tools), unblocking resources, and making tweaks to ensure that their sites don’t flunk with mobile users.

Six months after Mobilegeddon, it’s evident that some industry sectors have made major progress, while others continue to struggle with the task.

In this report,  we take a look at the sites of the largest U.S. public relations firms — the first major industry sector we looked at back in April — which as a group scored a substandard 57.3 percentage mobile-friendly compliance rate. We wanted to know whether this industry has made any progress towards improving performance on mobile devices, so let’s go right to the data telling the tale.

Using O’Dwyer.com’s list of the largest 100 U.S. public relations agencies, Didit checked each agency URL  in Google’s Mobile-Friendly Test Page tool and recorded the results. Back in April, we were able to test 96 of these sites (4 were not able to be tested by the tool); this time around, we were only able to test 94, again, because the tool was not able to pull any data from several sites.

The U.S. PR industry has made very significant progress in the past 180 days. 17 sites that failed Google’s test back in April 2015 now pass with flying colors, including two of the largest PR agencies in the world: Edelman Worldwide and Wagganer Edstrom.

Thanks to these improvements, the PR industry can now boast of a 75 percent compliance rate — a major betterment over the situation found 180 days ago when only 57.3 percent of sites passed.

On an industry-by-industry basis, any score at or above 75 percent indicates, in our view, that such an industry is “future-ready,” so we’re happy to say that the PR industry now exceeds this threshold.

It’s clear that PR agency management has woken up to the fact that mobile users are important, PR agency sites need to work as well on portable digital devices as they do on the larger-format desktop screen, and that mobile rankings matter for searchers making queries on mobile devices.

The Not So Good News

Some public relations agency sites, unfortunately, continue to fail Google’s Mobile Friendly Test. Here, for better or worse, are the agency sites that Google continues to give a failing grade to:

We cannot say why the firms listed above have not made their sites mobile-friendly in the past 180 days, nor do we have any way of directly examining their Google-sourced traffic to determine whether they have lost mobile traffic as a result of their failed scores. All we can do is to encourage them to move forward as quickly as possible, especially because in some cases considerable technical work is required to achieve a passing score on the Mobile-Friendly Test. But in our opinion it’s worth making the investment for four important reasons:

1. Two studies — the first from Adobe, the second from Stone Temple Consulting, have indicated that both traffic and rankings have been adversely influenced by Mobilegeddon. According to Adobe, “the negative effects of Mobilegeddon on sites that were not optimized for mobile resulted in a decrease of up to 10 percent in organic traffic.” Stone Temple’s analysis of 50,000 sites before and after April 21 indicate that “nearly half of (non-mobile friendly sites) dropped in rankings, and 2.3 times as many dropped as went up. In contrast, the Mobile Friendly pages fared much better, with an overall increase in rankings.”

4. Google rankings and search performance matters. SEO is a powerful component of modern-day PR, and prospects seeking an integrated solution may look more favorably on a site that is mobile-friendly than one that is not, especially if the PR agency offers SEO services as part of its service offerings.