March 20, 2014: It’s been a tough month for crypto-currencies. We’ve had the Mt. Gox meltdown, the recent FBI auction of Bitcoins, the public outing of Dorian Nakamoto — who may or may not have invented Bitcoin — and a lot of wacky commentary on whether crypto-currencies such as Bitcoin are worth less than the paper they’re not  printed on.

One thing’s clear, however, and Internet retailers need to take note of it: folks who buy goods with Bitcoins tend to be young, rich, and willing to spend their crypto-currency units. Over on Overstock.com, these free-spending shoppers are  snapping up sheets, socks, cellphone cases, and computer equipment,  they’re buying a lot more than the average dollar-equipped shopper, and Overstock.com’s owner predicts sales from Bitcoin purchases will soar to $10 million in 2014.

Are you ready for today’s trendy crypto-currency equipped shoppers?  Check out our infographic, which contains some essential demographic info on people who buy goods online with Bitcoins. Here are some intriguing facts about Bitcoiners: 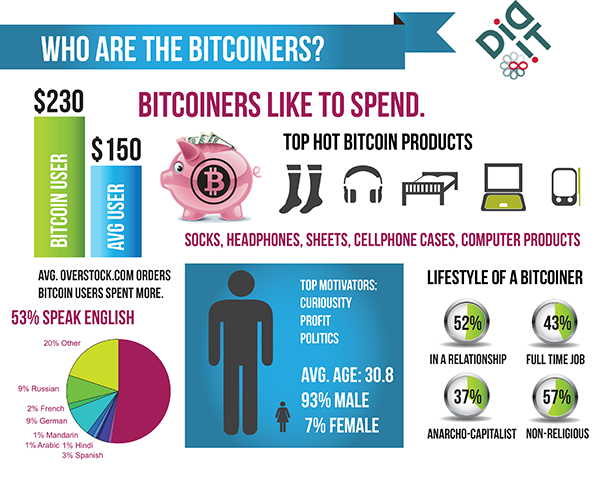