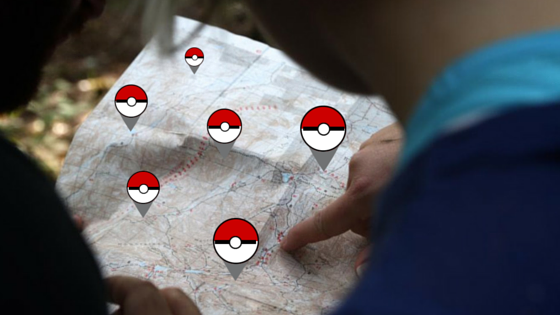 July 14, 2016: Pokémon Go has taken the nation by storm. The popular AR (Augmented Reality) game for smartphones has already exceeded 15 million downloads in just a few days, and — according to some estimates, is already more popular than Instagram, Twitter, and Tinder.

Marketers naturally want to get into the game, and a few lucky local businesses whose locations happen to have been included in the mapping software powering the game have capitalized on the craze by putting physical signs outside welcoming Pokémon Go players.

That’s all great, but how do you – the local retailer or other local business – get into the action?

Step 1. Download the game and inspect the map. It’s possible that your business already has been mapped by Niantic (the game developer) as a place where virtual creatures gather, in which case all you have to do is set up physical signage and think about special offers you might be willing to offer Pokémon players. One perk that you could probably offer players that will cost you (almost) nothing is a charger station, because Pokémon Go is a battery hog.

Step 2. Buy and set some lures. Pokémon Go has its own internal currency but you’ll have to use real cash to buy lures. Current pricing per Lure Module is 100 “Pokécoins,” an eight-pack goes for 680. Each lure lasts for thirty minutes.

At current real-virtual exchange rates, you can buy 100 Pokécoins for $0.99, but volume discounts are available. For $99.00, you can get 14500 Pokecoins, an investment that will allow you to power your lure for 72.5 hours (using the eight-pack lure).

72.5 hours is just a bit over 3 days of lure time, but unless you’re running a 7/11 in Times Square that’s open 24 hours, your money will go much farther. Most retailers are open only eight hours a day, so your $99.00 investment will power your lure for about 9 days. Obviously, you can turn the lure off on Sundays or other days you’re not open.

What’s next?
Given the extraordinary public interest in Pokémon Go, the early success stories reported by lucky businesses whose physical locations intersect with virtual Pokémon action, and the desire of national brands to induce the public to visit their locations, the next step will be for Nintendo and Niantic is to establish a self-serve advertising platform where businesses of all kinds can sponsor locations within the game. In fact, such a platform need not be limited to Pokémon Go but could extend to any and all geo-based games using Niantic’s back-end software.

Given that Niantic began its life as a Google funded startup, it’s possible that such a self-serve platform will work in a way similar to Google’s Adwords platform, but it’s not clear at this point how CPV (Cost Per Visit)-based ads will be sold. Auction-based models work very well in search engine advertising, but they might not work well with sponsored locations. For example, consider the plight of a retailer who faithfully pays her landlord each month for the right to occupy the physical space that is her store. Why should she be forced to bid against 3rd party competitors for the right to host a virtual Pokémon gym within, or above, the physical space she’s already paid for?

Questions like this have never been posed in advertising before, but they’re going to become common as VR-enabled games roll out.

In the meantime, if you’re interested in evaluating Pokémon Go’s potential to drive engaged foot traffic to your own business location, download the game, buy some Pokécoins, and drop some lures. If you do this, remember, that unlike mature ad platforms, Pokémon Go lacks an API, internal analytics, and other tools that can help you understand the values of the lures you plant and the people you bring in.

I’m sure such tools are coming very soon, but for now, you’re on your own in terms of establishing your own ROI, conversion rates, and other important success metrics.